What is the Difference? 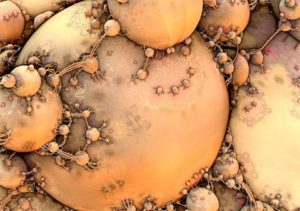 What is the difference between PSP and PSK in mushroom supplements?  There are two extracts derived from the Coriolus Versicolor mushroom that provide immune boosting properties as well as well as other properties that you can read about sites like mushroom studies.co.

We promised we wouldn’t get too technical on this site.  But,  we might have to bend that promise a little here to clearly show you the difference between these two Coriolus Versicolor extracts.

Coriolus Versicolor PSK is a protein-bound polysaccharide, which is used as an immune system boosting agent initially in China, Japan, and urope, and is now here in the US.  In Japan, PSK is approved as an adjuvant for conventional therapy and is covered by government health insurance.

PSK is an isolated component from the fully mature Coriolus Versicolor mushroom. PSK was first manufactured by Kureha Chemical Industry Co. Ltd.   The PS in PSK represents polysaccharide and K represents the first alphabet of the name of this Company.   It was originally written as PS-K and was later changed to PSK. &nbspo.  The commercial name of the product is Krestin.

PSK is obtained by immersing the mushroom in hot water and then isolating the PSK by salting out with (NH4)2SO4 Of the two extracts (PSK and PSP), PSK is the less potent.

Like PSK, it is also a kind of compound polysaccharide.  But, by taking the mushroom before it flowers, and using a patented alcohol precipitation process, Dr. Yang was able to isolate the essence of the polysaccharide, the small molecular protein (polypeptide) is connected.   So it is called Yun Zhi Duo Tang Tai or Yun Zhi Tang Tai.  It is called Essence of Mushroom (Yun Zhi).

The presence of frucose in PSK and rhamose and  arabinose in PSP distinguishes the difference between the two protein-bound polysaccharides, which are otherwise chemically similar.  Of the two products, because of the way it is extracted from the stem of the mushroom, PSP is the more potent.

Published scientific studies of PSP have used only extracts derived from the mycelia stage of the mushroom lifecycle, not extracts from fruitbodies (mature mushrooms).  The PSP extracted from mycelia is chemically different to extracts from the fruit body later in the mushroom lifecycle.  There are differences in monosaccharide composition (PSP has Galactose) and protein composition (PSP has peptides).  It is this chemical composition of PSP from mycelia that has been the subject of all the scientific research.  And it is this PSP that is used for 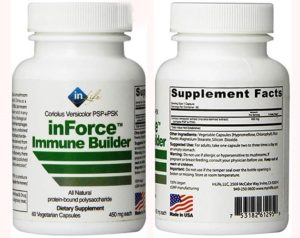 The process patented by Dr. Yang is the only known process capable of producing the pure and potent Coriolus versicolor mycelium needed as the raw material for research-quality PSP.  It must be extract from mycelia produced through deep layer cultivation in pharmaceutical grade sterile production facilities.

inForce Immune System Builder is manufactured in the US in a cGMAP compliant facility following strict FDA rules and regulations.

Every batch is Triple inspected for:

If any of the above components are found, the entire batch is destroyed.  inLife holds its products to the highest possible standards.